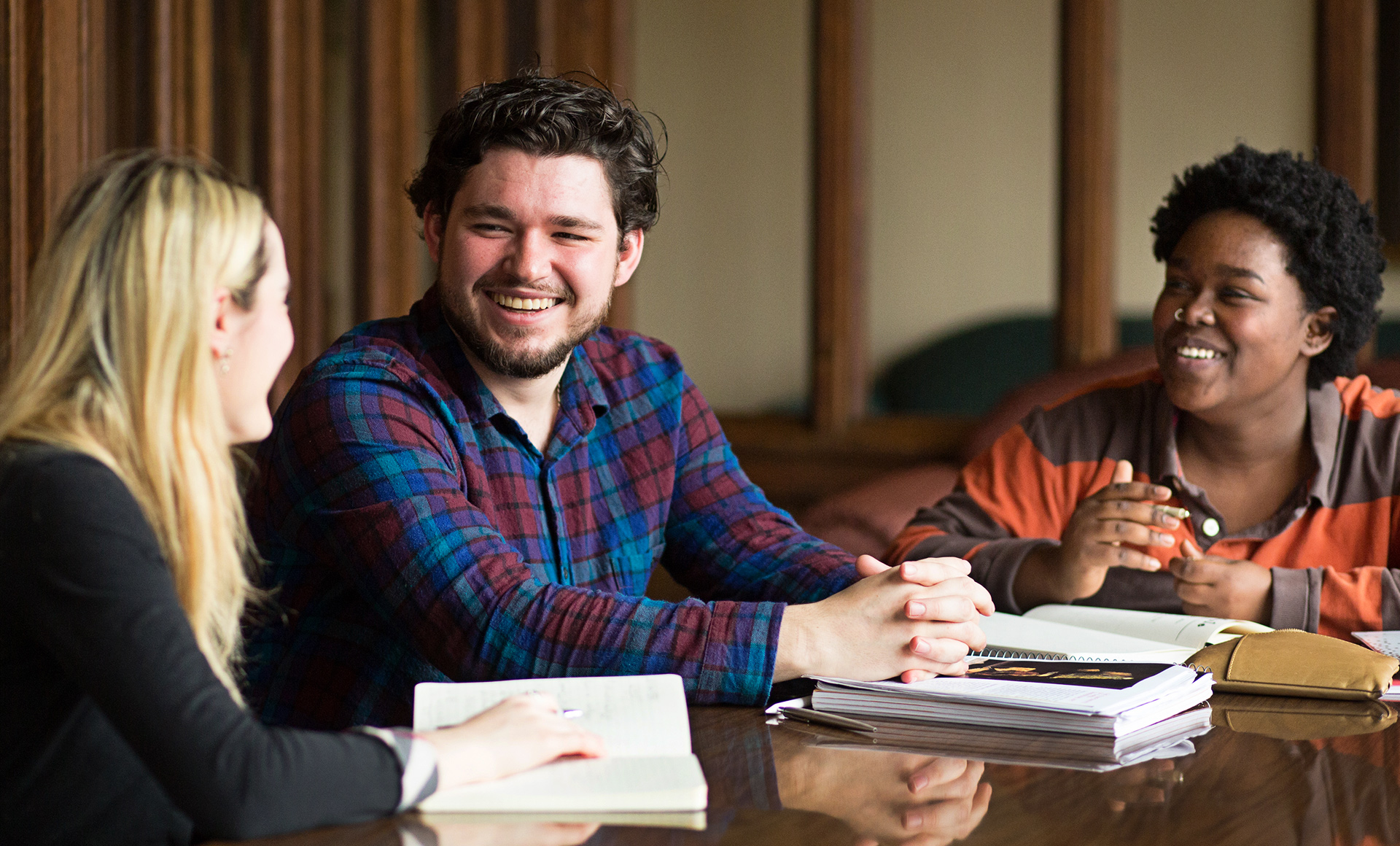 Bethany Alumni in the Spotlight Alanea Fink enrolled at Bethany College in 2011 attracted to the biology and equine programs.

“I quickly fell in love with both the campus and community,” Alanea said. “The entirety of Bethany has such a unique presence that I was immediately drawn to enroll as soon as I was able. That same community proved to be pivotal in my professional career.”

Alanea credits the faculty for helping her thrive as they highlighted her strengths and helped her work through her weaknesses.

“Professors in the science departments soon recognized that I had a deep love for animals and conservation and took the time to take me to the local zoo and introduce me to the staff,” she said. “That is the day my professional career began.”

She took internships at the Pittsburgh Zoo and at a local veterinary office.

When a part-time zookeeper position opened at the Oglebay Good Zoo, Alanea applied.

“I honestly wasn’t entirely optimistic, but in my gut knew that the job felt right,” she said.

She was beyond thrilled to get a job offer.

“I can’t remember most of the call, I was so excited that I just said, ‘Thank you so very much,’ wrote down the time of my interview and then immediately called my mother,” Alanea said.

She worked part time while finishing her degree in Biology and completing a research project on coral. While at Bethany, she was also an executive for the equine club, as well as Chapter Life Vice President and New Member Orientation Chair for Alpha Xi Delta.

“My professors are the reason I was able to accomplish everything that year,” Alanea said. “They saw that I had found my path and supported me every step of the way. The only cost was a few funny zoo stories and an update on their favorite animal from time to time.”

Upon graduation, she accepted a full-time position at the Good Zoo, eventually working with the snow leopard, cheetahs, bears and zebras as keeper and trainer.

In 2018, she began searching for a job at a larger facility. She received about a dozen offers, but was drawn to the Audubon Zoo in New Orleans.

“New Orleans is much like Bethany, there’s a strange magic,” Alanea said.

“Where Bethany has trees and foothills, New Orleans has shotgun houses and street cars. … The community aspect is identical, everyone calls you ‘baby’ and they check on you, your family, and then ask after your pets too.”

Alanea is an African Carnivore Keeper III at Audubon, and her primary responsibility is the care and training of the four African lions, Kali, Nia, Zuri and Arnold.

She also offers the cats enrichment and husbandry training, which means the animals actually participate in their own care. For instance, they’ll stand up so that their abdomens and toe pads can be expected and open their mouths and hold for dental checks.

“While training is my favorite part of the job, caring for the animals is actually incredibly dynamic,” Alanea said. “A lot goes into their day to day care. Everything from their diet to their behaviors must be closely managed and tracked.”

Arnold and Kali have a breeding recommendation through the Species Survival Plan and there’s hope that they’ll breed one day.

Though the job itself isn’t easy, she said waking up and going to work in the easiest thing in the world, because her work is helping to ensure that lions are around for future generations.

“I have truly found my niche here at Audubon, and Bethany is how I found it,” she said. “For that, I am eternally gratefully to our dear old Bethany.” Coming to Bethany from a major metropolitan area was a big change in environment. I grew up in the suburbs and countryside of Maryland, relatively close to Washington, D.C., but the development around it never seemed so crowded until I experienced the true quiet at Bethany College.

Majestic in its Hogwarts appearance, Bethany College became my home away from home for the four years of my undergraduate degree, which resulted in a Bachelor’s of Science in Computer Science alongside minors in Business Administration and Cybersecurity.

Attracted to the small school size and the personal connections with teachers, I came in undecided as a freshman, and, after trying a few different areas of interest, I finalized my degree track at the end of my first year.

With the help of the registrar and a lot of sacrifice, I took control of my course tracking, ensuring that I would graduate within four years even after adding two minors. Finishing my degree requirements early, I passed my comprehensive exams in January of my senior year and had the most relaxed semester of my entire journey the following spring, finishing up my last courses for a minor and a liberal arts core requirement.

Now that I’m graduated and back in Maryland, I am a software engineer at the Johns Hopkins University Applied Physics Lab in their Discovery Program. I still keep in touch with the close friends that I got the privilege of making during my time at Bethany College and have already returned for Homecoming and will do so in future years.

While I worked tirelessly at internship applications with Bethany’s Career Center, it was resume refinement and interview prepping with them and personal networking through my contacts that landed my internship at the Johns Hopkins University Applied Physics Lab as a NASA intern assigned to work on the Parker Solar Probe web applications.

Out of that amazing experience, I not only found new mentors in computer science and got real-world experience in the field, but I also secured a full-time position by the fall of my senior year for after my graduation. My education at Bethany and my experience as an All-American student-athlete definitely helped me prepare for my education at the University of Pittsburgh School of Law. Maintaining a high level of productivity in the classroom and on the field helped, because doing so fostered time-management skills.

My Bethany coaches were always very supportive of me wanting to do well in the classroom. The people at Bethany are the most important part of the institution. My time as an assistant in the president’s office was an experience I’ll never forget as it has helped me develop professionally and facilitated important relationships I still maintain.

The ability to form new relationships and step out of my comfort zone are important life skills, and the experience of stepping out and making my own decision has been beneficial to me.

Thankfully, I experienced a great deal of success at Bethany, and that continues to inspire me because the success I experienced there is something I worked extremely hard for. It continues to inspire me because as I’ve gone through life since graduating, I always remember how hard I worked at the things I set my mind to, and I know that if I continue to work hard, I’ll continue to be successful in the future. Bethany allows you to start at the campus television station as a freshman. Every other school I looked at made you wait until you were a junior to be able to participate in the campus production. I just knew I wanted to be in television, and I was able to hold almost every position at the campus TV station. It definitely prepared me and helped me get into the field.

A Bethany education is like no other. It’s still one of the only schools that requires you to pass comprehensive exams before you graduate. Honestly, that helped me more than I ever thought it would because I graduated knowing everything I needed to know in my major. The liberal arts focus helped me think outside the box and have skills that were useful in different ways, like critical thinking and communication.

Although Bethany may be small…it is mighty. And I loved, loved, loved my Greek experience! I joined Zeta Tau Alpha my freshman year, and it really helped me to get comfortable with college life. Bethany is where I met some of my closest friends and have some of my most cherished memories. I remember how peaceful the campus was…how you could go to the library and sit in one of the back cubby-desks and read or study without noise or distractions while observing the beautiful landscape looking out over the hills of Bethany.

The sciences coursework at Bethany was integral to preparing me to earn a higher degree in the field of biology. However, more importantly, the liberal arts background that I received at Bethany has had the largest impact on the trajectory of my career. For example, my job now, and every job I’ve had up to this point, has required me to work with people from a spectrum of disciplines. Specifically, courses I took to fulfill degree requirements outside of the biology department at Bethany, like sociology, human development, and a variety of psychology courses, have helped me to understand how to relate to people from all different backgrounds.

The campus community seemed so close-knit and inviting, and it felt like the faculty were really interested in ensuring the students no only succeeded in their studies but also stepped outside their comfort zones to experience new areas of study and thought. Prior to Bethany, my worldview didn’t extend much beyond my like-minded group of friends and the small town of Washington, PA. At Bethany, I was introduced to ideas that had global implications by professors who had experienced those ideas firsthand. I became friends with people who actually lived in those countries that I only knew about from geography class.

I’ve made a career on the fact that things change. My liberal arts education not only gave me the tools to continue to learn and change with the times but also actually positioned me to be in front of those changes and sometimes even be the person leading or causing change.

Any professional success I’ve had is because of Bethany. My family has always, and continues to, inspire and support me. However, Bethany provided me with the professional and personal foundation that I consistently rely on in my career.

As a first semester freshman, I was able to host my own radio show, play for and act as the vice president of the lacrosse club, and also write for the campus newspaper. I loved the strong reputation of the communications department, but what I really loved was that I could immediately get involved.

Even as I entered Bethany, I wasn’t completely sold on any one communication medium—print, television, radio, graphic design. This made a Bethany liberal arts education the perfect fit for me.