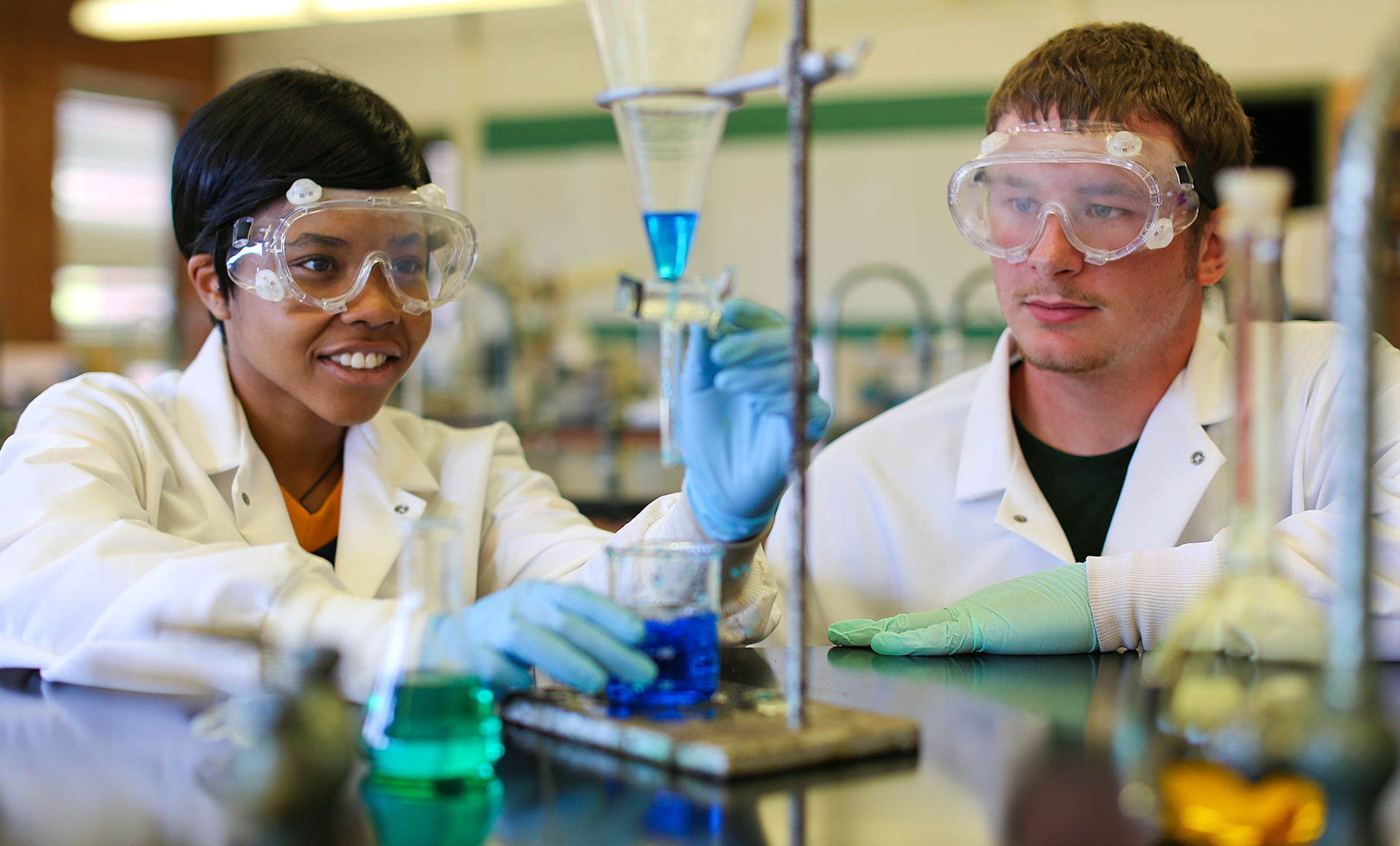 The program in Physical Science, with the option for Pre-Engineering, strives to introduce students to the rich body of knowledge expressing the physicist’s concept of the universe and its physical laws. Integrated into the program is a 3-2 dual degree engineering track. In this program, a student completes three years at Bethany and two years at our affiliated engineering school, Case Western Reserve University. Students completing this dual degree will graduate with a Bachelor of Science degree in Physical Science and a Bachelor of Engineering degree from CWRU in five years.

Bethanians study physics, chemistry, computer science, mathematics, economics, and the humanities, as well as choose an engineering focus, such as aerospace, biomedical, chemical, civil, computer, electrical, materials science, mechanical, polymer, or systems control. Alternatively, engineers can opt to remain at Bethany to complete a bachelor’s degree and apply to any engineering school for a master’s degree. Often, Bethany students choosing this route double major in order to supplement their graduate plans.

What can you do with a degree in Pre-Engineering? “Becoming an architect is how I chose to combine the hard science skills of a physics major, and the artistic skills I’d recently uncovered. After graduating from Bethany, I finally got the big city experience I’d been seeking, while earning Master of Architecture degree at the New Jersey Institute of Technology in Newark, just outside Manhattan. My liberal arts background allowed me stand out from my peers, helped me land an internship designing high-end custom homes, and then my first job out of school designing condos and houses to feed the booming NYC real estate market.

PHYS 100 Physics of Sports 4 credits
This course is an introduction to the fundamental concepts, laws, and theories of physics as they relate to a variety of sports. At the end of the course, students relate these concepts to their sports activities.

PHYS 103 Everyday Physics 4 credits
Everyday Physics is a study from non-technical and non-mathematical viewpoints of the aims, methods (experimental and theoretical), and achievements in the attempts to understand the basic principles governing the physical world. The course begins with commonplace observations and concrete examples and then proceeds to generalizations and hypotheses which unify them. This course is designed for non-science majors. The course includes three hours of lecture and two hours of laboratory each week. (This course may be taken for credit as GENS 103.)

PHYS 151 Astronomy 4 credits
This course is designed to introduce the non-science major to the field of astronomy. Topics include the history of astronomy, light and spectra, the solar system, stars and stellar evolution, galaxies, and the past and future history of the universe. Although the course is primarily descriptive, physical principles underlying astronomical phenomena are studied. The course includes three hours of lecture and two hours of laboratory each week. Laboratories include evening observation sessions and a field trip. An additional course fee is required. (This course may be taken for credit as GENS 151.)

PHYS 201-202 General Physics I & II 4 credits each
General Physics is a two-semester introduction to classical physics for science majors. The first semester focuses on classical mechanics, including kinematics and dynamics in two and three dimensions, momentum, energy, and rotational motion. The second semester covers electricity and magnetism, wave mechanics, and optics. The course includes three hours of lecture and two hours of laboratory each week. Students must have taken or be currently enrolled in MATH 201 or equivalent.

PHYS 222 Electronics 4 credits
The student is presented with the fundamentals of digital and analog circuit analysis. Among topics originally specific to analog circuits are DC circuit analysis using Kirchoff’s laws, mesh equations, transformations, the use of multimeters and oscilloscopes, AC circuit analysis using complex impedances, capacitors, and inductors, resonance, step function analysis, and transitions. Among the topics originally specific to digital analysis are simple logic gates, IC chips, Boolean algebra, adders, flip-flops, shift registers, and counters. After the fundamentals are covered, the emphasis shifts to circuit analysis involving knowledge of both perspectives. This course includes three hours of lecture and two hours of laboratory each week. (This course may be taken for credit as CPSC 222.) Prerequisite: PHYS 201,202 or equivalent or permission of the Chair of the Department.

PHYS 241 Mathematical Methods in the Physical Sciences 3 credits
This course is primarily intended for students with one year of calculus who want to develop, in a short time, a basic competence in each of the many areas of mathematics needed in junior to senior courses in physics and chemistry. Thus, it is intended to be accessible to sophomores (or freshmen with AP calculus from high school). Topics include ordinary and partial differential equations, vector analysis, Fourier series, complex numbers, eigenvalue problems, and orthogonal functions. (This course may be taken for credit as MATH 241.) Prerequisites: MATH 201, 202 or permission of the Instructor.

PHYS 300 Modern Physics 3 credits
This course uses mathematical and physical reasoning to present the foundations of modern physics. It emphasizes the subjects of special relativity, kinetic theory, atomic theory, and introductory quantum mechanics on the level of the Schrodinger equation. The course is intended for chemistry, mathematics, physics, or pre-engineering majors. Prerequisites: PHYS 201-202 or permission of the Chair of the Department.

PHYS 302 Thermodynamics 3 credits
This course is a study of the physics of thermodynamic systems. Most of the course is devoted to the macroscopic properties of systems, including the first and second laws of thermodynamics, heat, entropy, imposed and natural constraints, equations of state, and applications. Statistical mechanics is briefly introduced to derive the large scale properties of systems from the microscopic behavior of their elements. Prerequisites: PHYS 201-202 or permission of the Chair of the Department.

PHYS 303 Plasma Physics 3 credits
This course examines the properties of plasmas, a collection of charged particles that exhibit collective behavior, and which are much more common than the other phases of matter (solids, liquids, and gases) when the entire known universe is considered, and which are becoming increasingly common in modern technologies. Prerequisites: PHYS 201, 202, 241; MATH 201, 202.

PHYS 304 Optics 3 credits
This course is an introduction to the nature of light and its uses. It begins with a study of geometric optics, including reflection, refraction, lenses and mirrors, and then moves to topics in physical optics, such as interference, diffraction, coherence, and polarization. Prerequisites: PHYS 201-202 or permission of the Chair of the Department.

PHYS 318 Advanced Physics Laboratory 2 credits
This course is designed to build on students’ previous laboratory experience by acquainting them with more advanced experimental equipment and techniques. Students are taught to think like an experimentalist: to analyze and reduce error; to understand statistical inference; to interpret results; to write clear, thorough laboratory reports. Experiments in modern physics, optics, nuclear, and solid state physics are emphasized. Prerequisite: PHYS 300 or permission of the Chair of the Department.

PHYS 401 Introduction to Quantum Mechanics 3 credits
This course is a continuation of the study of classical quantum mechanics begun in PHYS 300. Topics include the three-dimensional Schrodinger equation, selection rules, addition of angular momentum, fine structure in hydrogen, exchange symmetry, the Zeeman effect, and stimulated emission. Prerequisite: PHYS 300 or permission of the Chair of the Department.